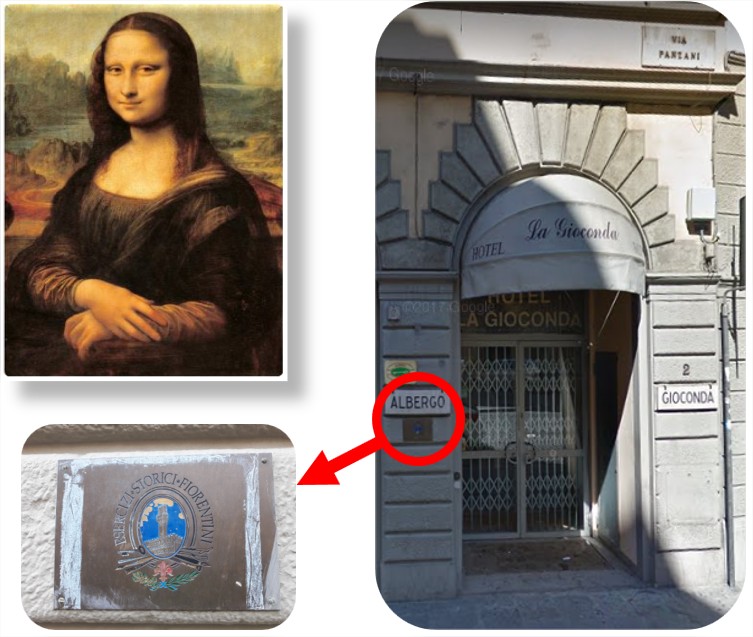 Itinerary to discover Florence curiosities, I strictly recommend by walking and slowly!

There are more versions of all legends, but I will always tell you the only one that I prefer.

You can use following link to go there.

Link to the point

No, don’t worry, by following this direction you will not arrive by walking until Paris, at the Louvre museum where the Mona Lisa is currently located. No, you will not find yourself in front of the portrait, but only in front of a golden plate of a Florentine association placed on a wall, near a door, in memory of the place where a curious story happened a long time ago and made the portrait much more famous worldwide.

Updated note: since December 2018 also this nameplate disappeared!
Please refer to this address “via Panzani No. 2”, obviously in Florence!

You are at the point where you could have bought the Mona Lisa in 1911, you have read it right and I don’t speak of a copy from a peddler, but just the original.

Everyone knows the most famous painting made by Leonardo da Vinci. Mona Lisa, better known in Italy as the Gioconda, a painting that probably is the portrait of Lisa of Antonmaria Gherardini, an Italian noble woman, hence “Mona Lisa”, wife of Francesco di Bartolomeo di Zanobi del Giocondo, hence “Gioconda”.

Of course, in 1911, there was not Leonardo da Vinci trying to sell his painting (he died in 1519) and neither a famous auction house of that time, a gallery or art dealers, none of these. The truth is that you could have bought it from a whitewasher.

That’s right! Perhaps not everyone knows that one of the most famous paintings in the world, the Mona Lisa, it has been the protagonist of a sensational theft made by an Italian whitewasher. 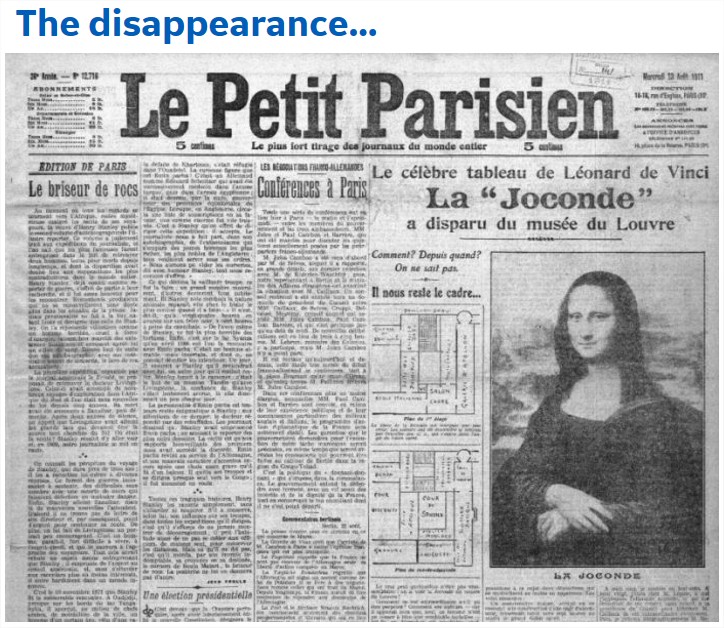 Exactly in the point where you arrived in street “via Panzani”, just in this place, once there was the hotel Tripoli Italy, then became Hotel Gioconda and it was here, in a hotel’s room that the who stole the painting, Vincenzo Peruggia, he tried to sell the painting to an antiquarian, who, make suspicious, presented himself to the appointment with the Uffizi Gallery’s director.

At that time, just like today, the Mona Lisa was exposed in Paris, at the Louvre. Vincenzo had emigrated to France to look for a job and obtained a temporary position in the museum as worker. In a short time he understood, without mistakes, that many exposed painting were Italian, stolen from Italy during the Campaigns of Napoleon. Driven by a strong sense of patriotism he decided to make a crazy act to return at least one panting to Italy. He chose the Mona Lisa, but for practical reasons, I don’t say that was a random choise, but surely this choice was according to his possibilities. Painting dimensions, oil on wood, a poplar table, are contained, 77×53 cm (height x width) and therefore made it easy to transport and hide.

The theft occurred in 1911, during a closing day of the Louvre. Vincenzo hid himself inside the museum, he removed both the frame and the glass and he came out with the picture under his coat. He wanted to return to Italy the painting made by Leonardo because he believed that it had been stolen and brought to France during the Campaigns of Napoleon. The painting was only started in Florence, then it was Leonardo da Vinci who brought it to France and sold it to King Francis I.

Hence Napoleon? No, he didn’t steal the Mona Lisa painting from Italy, but certainly he not remained alien to its charm because he wanted to expose it in his wife Josephine’s bedroom, then the portrait was transferred to the Musée Napoléon, the same that today is called Louvre.

Once discovered the painting disappearance, furious investigations were made and even the poet Guillaume Apollinaire was arrested and processed because he was suspected for the stolen, his friend Pablo Picasso was also interrogated. These guys were involved in the investigation of the Mona Lisa disappearance because they had bought some statue from people which stole things from Louvre. At that time, it was not unusual that some masterpiece was stolen, the security system was not so efficient and sometimes, something was missing. The process was strange and curious and at the end the two guys were released without any sentence.

Let’s go back to Vincenzo, the patriotic whitewasher which stole the Mona Lisa, he hid the picture for two years, for most of the time under the table of his kitchen!!! Then, in 1913, in Italy, in Florence, at this point, in a hotel’s room, he met the antique dealer contacted by him for the sale, but he also brought to the appointment the Uffizi Gallery’s director. Vincenzo wrote a letter to contact the Florentine antiquarian, but as he read it, the man became suspicious. It reported following words “The painting is in my hands, it belongs to Italy because Leonardo is Italian” signed “Leonardo”.

Antique dealer and director understood that they were in front of the masterpiece made by Leonardo, a priceless painting. Using the excuse that they needed to examine it, they convinced him to leave the painting to them and in a short time Vincenzo was arrested while he was walking around downtown.

Vincenzo believed to receive a reward, an award, an annuity, instead he was processed and sentenced, but for one year only of prison, then reduced to seven months.

The theft transformed the Mona Lisa into a legend, the bizarre international case helped to increase its world fame. At the end of this story, like me, you will remember only the name of Vincenzo and that’s why only now I quote the names of the antiquarian Alfredo Geri and the Uffizi’s director Giovanni Poggi to whom we all must be grateful for having recovered and shared the the humanity’s heritage finally found again.

The crazy theft could damage or make it disappear the Leonardo’s artwork, heritage of everyone.

Before returning to Paris, the Mona Lisa was exposed for a final greeting, in the Uffizi in Florence and then in Rome.

Go Back to Home